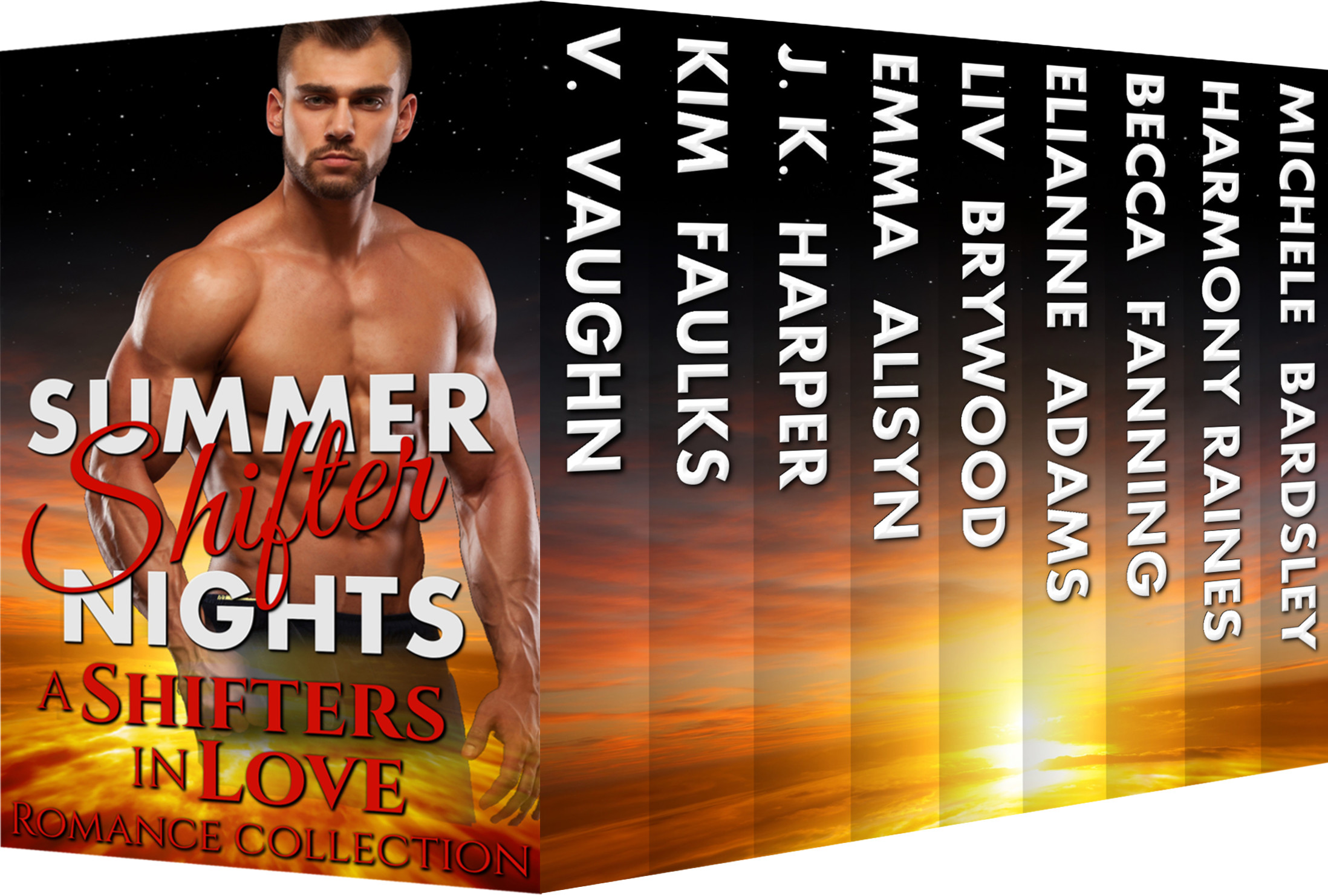 The USA Today and Bestselling authors who have contributed to this box set hope you enjoy our collection of shifter romance! This box set contains 9 stories of alpha men winning the hearts of strong women. Fill a few hot summer nights with the magical world of true-mate love. Don’t forget to fill your days, too. Look for the sister box set, Summer Shifter Days for 8 more books.

Feral Mate – Liv Brywood
Kayla -I’ve always been the good girl of the pack, but I’m done being good. Devin is everything I should avoid. He’s dark, dangerous, feral… and I’m falling in love with him.
Devin – She’s too good to mate a feral wolf like me. Young, innocent, and sweet, she’s the kind of woman I can’t wait to corrupt. I never wanted a mate, until I met her. Now I’ll have to fight her family to claim her.

On The Hunt – Becca Fanning
Leo had been alone for a long time. Centuries, to be exact. Having decided to leave his Pride behind, Leo set out to start a new life in a small town, employed as the local butcher to satisfy his lion’s want of blood and tearing flesh. Leo couldn’t ask for more in life until he discovered a huntress…

Damon – Elianne Adams
Ava Garamond doesn’t want a mate—she needs one. If she doesn’t get herself, and her siblings, away from their father, they’ll all end up dead. After her pack turns their backs on them, she joins the Citadel, giving up her rights to choose her mate to ensure their safety.
Forced into finding a mate by a senile elder who holds way too much power, Damon McCrae enters the Citadel of the Chosen. His dragon wants more than a warm and willing body, it wants its fated, but time has run out, He’ll return home with a female, and he can only hope she’ll be strong enough to lead their people at his side.

Warriors of Stone 1 – Emma Alisyn
Brilliant scientist Surah, the half-human daughter of a royal concubine, will cure Prince Malin’s genetic disease even if it kills her. If she fails, she will be sold in marriage to the highest bidding warrior. But Malin will kill any warrior in court, winged or no, to prevent them from laying claim to his mate. Especially when she conceives his baby—the true Heir to the gargoyle throne.

Hunter’s Moon – J.K. Harper
Abby Kenyon belongs to Quentin Walker body, heart, and soul. But she’s a wolf shifter, and he’s one brute of a bear shifter. He needs to win her over—and time is running out. Her pack’s annual full moon mating run is his last chance to prove that only he can win the hunt for her heart.

Savage – Kim Faulks
A dark, werewolf romance. Transforming from woman to wolf can be deadly… Locked in her cell and surrounded by guards, Mia fights the wolf who’s eager to claim her body and her mind. When a guard panics and leaves her cell door open, she does the only thing she knows – run. Hunted by the only pack she’s ever known and the beast inside Mia will need to fight. Will two unlikely Alphas show her that pain and pleasure can be two sides of the same coin? Or will she become the werewolf she’s meant to be?

A Debt to Bear – Harmony Raines
Bear shifter Ryan Sinclair arrives in Silver Springs on business, but fate steps in when he meets his mate Josie Halliwell. Torn between needing to help his mate and doing his job, he is swept away by Josie. She soon makes Ryan realize he needs to change his life, or risk living in regret.
Josie has been hurt and betrayed, more than Ryan could ever imagine. She tries not to let it cloud her life, but when Ryan arrives in town Josie feels as if history is about to repeat itself.
And she is not going to let that happen. Not even if the hunk of a man has dimples to die for.

Called by the Bear – V. Vaughn
When Carly’s dreams call her, she grabs her best friend to set out on a road trip to find the men in their dreams. What they discover is a secret world of werebear full of danger, adventure and true-mate love. What they learn is they’re stronger than they ever imagined.